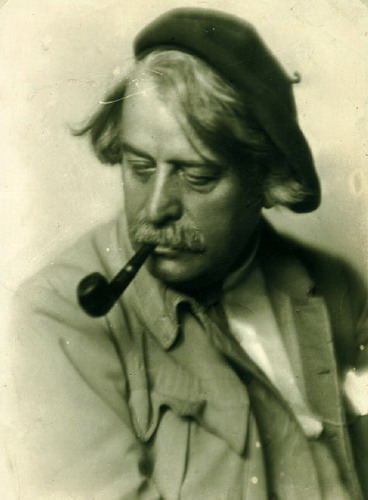 He studied at the Academy of Munich between 1884 and 1887; then, on a Hungarian State scholarship, be travelled to Paris; he lived in France until 1901. While in Paris, he worked in Mihály Munkácsy's studio and visited the Julian Academy. In 1889 he turned away from Munkácsy's style and, together with the Scottish painter Knowles, he moved to Neuilly near Paris. It was here that he developed his style based on the reduction of colours, characteristic of his period between 1889 and 1900. His painting. "My Grandmother" was exhibited in the Salon du Champ-de-Mars in 1894. It was this picture that aroused the interest of the Nabis group (Bonnard, Denis, Vuillard) and of "les artists intelligents", the group of young artists gathered around the magazine "Revue Blanche", who invited Rippl-Rónai to join their company.

In 1896 Rippl-Rónai was commissioned by Count Tivadar Andrássy to design the dining room and the entire furniture of his palace in Budapest. In this way he became involved in the applied arts, too, designing glass windows, furniture, chinaware, glasses and gobelins. The embroidery designed by him and executed by his French wife, Lazarinne, won them a silver medal at the Paris Universal Exhibition in 1897. In 1890 he left Paris and returned to Hungary, setting in his home town, Kaposvár. Initially, he painted intimate interiors here then developed his characteristic "corn kernels" style, using bright colours and small brush-strokes which left the tiny patches of paint distinct.

In 1912 his work was awarded with a silver medal at the International Fine Art Exhibition in Amsterdam: two years later he won a gold medal in Vienna with "Maillol's Portrait", currently owned by the Musée National d'Art Moderne. In 1925 his work was honoured with Belgium's Medal of the Knight of the Leopold Order. Still in the same year he received an invitation from the Uffizi Gallery of Florence to contribute to is world-famous collection of self-portraits.