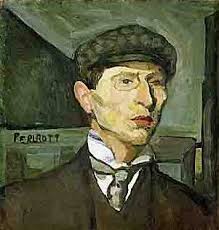 He studied at the School of Industrial Drawing, then at József Koszta, and later in Nagybánya. He attended the Julian Academy, Paris, for some time where his masters were J.P. Laurens and H. Matisse. After his journey Spain in 1911, he returned to Hungary. His early works (e.g. "Gypsies in the Barn", 1904) reflect the style of the Nagybánya school, while his later works show the influence of Greco, Fauves and cubism. Some of his drawings are revolutionary experiments ("The Interior of the Chamber in Lőcse"). The influence of Cézanne, and those of Braque are present in his landscapes and still-lives, respectively. Later he returned to post-impressionism. The picture with nudes from the 1930s show Gaugain's influence.