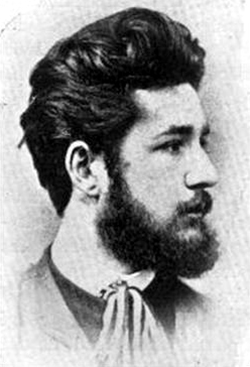 An outstanding figure of Hungarian realist landscape painting. Mihály Munkácsy convinced him to take up painting, and in 1864 Paál enrolled in the Academy in Vienna. His trip to Holland in 1870 had a major impact on his career: the example of Dutch landscape painting liberated his propensity for colours. In 1872 be travelled to France and settled in Barbizon. He painted nothing but landscapes - this genre became the sole manifestation of his feelings, moods, and ideas. Realism was combined with a lyrical, sometimes even romantic approach in his pictures. Trails in the woods, small clearings, the depth of the forest - his favourite themes - are depicted sometimes light-heartedly ("Path in the Fontainebleau Forest", "Landscape with Cows"), and other times with somber colours ("Inside of Forest", "Way in the Forest"). As a result of his sensitivity and tense disposition, some of his paintings were more dramatic or more melancholic ("Fogs' Swamp", "October Wind", "Landscape during Storm"). His pictures are exquisite achievements of Lyrical realism: his oeuvre is related to the tendencies of Barbizon School.