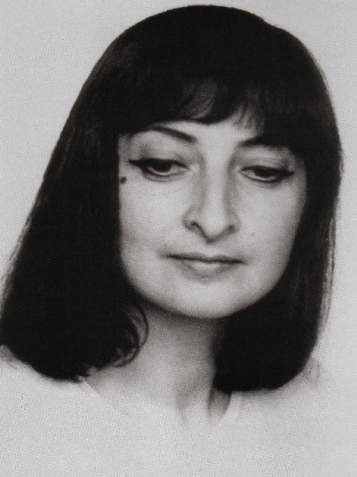 Painter and graphic artist. She graduated from the Academy of Fine Arts as a student of István Szőnyi in 1950. Her interest was oriented towards metaphysically inspired surrealism as opposed to realistic spectacle painting. However, her unique non-figurative art lacks the possibilities of absurd association. Her recurring motifs are the ancient historical past, the material and spiritual remnants and fragments of disappeared cultures, dilapidated ruin cities reminiscent of a glamorous past; and walls evocative of seclusion, solitude and fear ('Pompeii Wall', 1968; 'Wall with Icons', 'Blue and Green', 1969; 'A Series of Mazes', '48 Boards', 1973). She was also engaged in puppet design. Her most significant exhibitions: Fészek Art Club (1957); Esztergom, Balassa Museum (1966); Székesfehérvár, King Stephen Museum (1967); the Castle Museum of Diósgyőr (1972); the workshop of the National Gallery (1977); Budapest Museum of Modern Art (1979). Her one-artist displays abroad were in: Tel Aviv (1977); Rome (1969); Paris (1970); Warsaw (1972); German Federal Republic (1976, 1978).