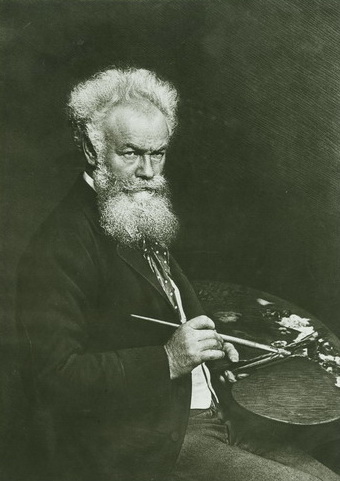 He was an outstanding Hungarian realist painter of the 19th century. He started to paint during the years he spent in Arad as a joiner. With the help of partons be studied at the Viennese, Munich and Düsseldorf academies. Munkácsy painted his first major work, the outstanding "The Condemned Cell" in Düsseldorf, in 1872, together with his friend László Paál, he moved to Paris, where be lived until the end of his life. Munkácsy painted his genres in the style of realism between 1873 and 1875: "Midnight Ramblers", "Farewell". "Churning Woman", "Woman Carryng Brushwood", and "Pawnshop" were the zenith of his career. He married the widow of Baron de Marches in 1874, and his style changed from that time on.

Departing from the typical subjects of realism, be produced colourful salon paintings and still-lifes. This was the period when be also turned to ladscape painting; his growing interest is marked by such great paintings as "Dusty Road". "Corn Field", and "Walking in the Woods". The assimilation of László Paál's style is apparent in the landscapes painted during the 1880s, such as "Avenue" and "The Colpach Park". His realist portraits - e.g. of Franz Liszt and Cardinal Haynald - were also born around this time, together with his religions paintings, such as "Christ in front of Pilate", "Golgotha" and later, "Ecce homo". Towards the end of his career he painted two monumental works: "Hungarian Conquest" for the House of Parliament and a fresco entitled "Apotheosis of Renaissance, for the ceiling Kunsthistoriches. Museum in Vienna.