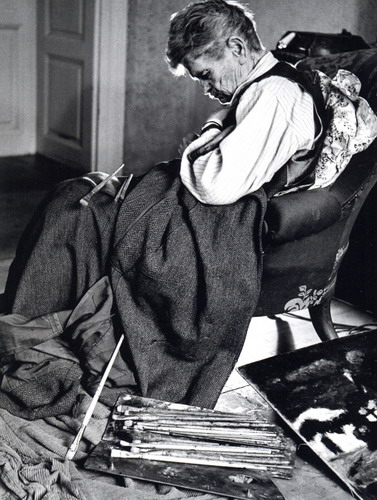 The most significant representative of the Alföld School, who continued Munkácsy' tradition. A student in the Vienna Academy from 1882 to 1883, Koszta was a pupil of Károly Lotz and Bertalan Székely in the following years. He went to Munich on a fellowship where he started to paint the picture "Mátyás and Beatrix", on which he worked in Benczur's master school, too. "Returning Harvesters", a picture on peasents' lives brought him a fellowship of patrons in 1897. He worked in Rome, Paris and Nagybánya in 1899-1902. He painted "Three Kings" in 1907. His democratic plebeian art was dominated by subject matters borrowed from peasants' lives, dramatic portrayal of landscapes of the Great Plain, strong colours based on contrasts of light and shadow, and expressive realism. His individual style evolved from the 1920s when he lived in his cottage not far from Szentes for some time. His major works: "Girl with Geraniums", "Corn Snappers", "Woman Drying Plates".