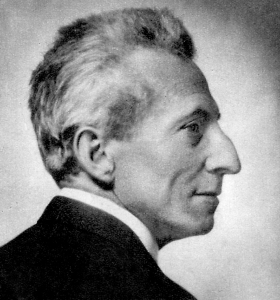 After his studies in Munich in 1890 where his master was Simon Hollósy, he studied at the Julian Academy, Paris. He was one of the founders of the Nagybánya school in 1896. His lively plein air pictures reflected the life of peasants in Nagybánya. His portraits of writers (Pál Gyulai, Kálmán Mikszáth, Károly Eötvös, Géza Gárdonyi, and Zoltán Ambrus) brought him first success. After 1900, he created a naturalistic style of his own in Buják with peasant people in idyllic pictures in national costumes. He was a teacher of the Art School in 1914-38. As a writer, he wrote a lot of articles to protect folk art. His major pictures: "Tale", "A Rumanian Woman Going to Church" (1907), "An Evening in the Mountains", "Wood-Carrier" (1908), "Bride from Buják with Jug" (1923), and "Peasant Bride in Nógrád" (1934)