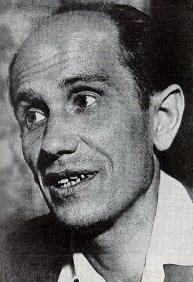 Painter, graphic artist. He was an apprentice in his father's joiner shop. He began drawing very early and was taught to paint by a sign painter. His left arm became paralyzed in World War I. From 1916 onwards, he lived in Budapest. He learnt to paint and do copper engravings in Károly Kernstock's school. He produced mostly pencil and tint drawings during 1916-18. He met left-wing emigrants in Vienna and joined the Austrian Communist Party. His works reflected the influence of German expressionists and his political experiences in Vienna in 1928-29, when his most significant graphic work, "1514", wood engravings inspired by the Dózsa peasant revolt, was finished. His final period is best respresented by "Orders" (1930), "Sleeping" (1932), "Execution" (1932), "By the Rails" (1932) and "Mother" (1934). His Dózsa-series were transformed in copper engravings around 1931. Poverty and diseases put an end to his life. His art was influenced by expressionism, but he created an entirely individual style of his own in the last years of his life uniting strict composition and lyrical colours with portrayal.