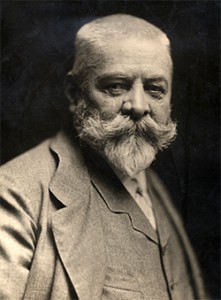 After 1851 he studied under H. Anschütz, and then between 1855 and 1869, under K. Piloty. He first scored success in 1867 with the painting "László Hunyady's Farewell". In 1870 he won the national competition of history painting with "The Baptism of Vajk". He assisted Piloty with the frescoes of Maximilianeum and Rathaus in Munich and he also illustrated books by Schiller. The Bavarian king Ludwig II commissioned him to paint Rococo themes, that was the time that be went on a study trip visiting Italy and France. He was invited to direct the painters schools at Prague and at Weimar, but only accepted the professorship at the Academy of Munich in 1876.

He moved back to Hungary in 1883, and became a professor of the Masters' School of Painting, established specifically for him. He soon became the favourite artist of the official line of cultural policy: he painted the portraits of kings and aristocrats, as well as producing monumental history paintings ("The Recapture of Buda Castle", 1896). Other major work by him are the altar painting and mosaic of the St. Stephen Cathedral in Budapest and the panneaux of the Hunyadi Hall in Royal Palace of Buda. In addition, he often painted mythological subjects and nudes, as well as groups of putties in Ruben's mould, decorated with splendid flowers. With these paintings he rivalled the history painting of Makart.