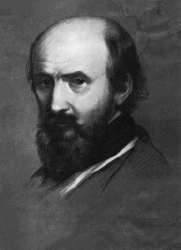 Markó was one of the greatest Hungarian landscapists of the first half of the 19th century. He studied at the Academy in Vienna after 1822.

Around 1830 be painted several landscapes depicting the Hungarian regions in Neo-Classicist style: "Visegrád" is the most famous among them. With the help of the banker Geymüller he travelled to Italy in 1832; he spent the rest of his life there. He worked in Rome, Pisa, and Florence.

After moving to Italy he worked in the style of the so-called heroic landscape painting. He depicted idealized landscapes with mythological or folkloric figures. "Fishermen" and "The Tivoli Region" are the most typical examples of this style.

"The Puszta" (Great Hungarian Plain) is a memento of his visit to Hungary in 1853; this painting reveals the influence of Romanticism.