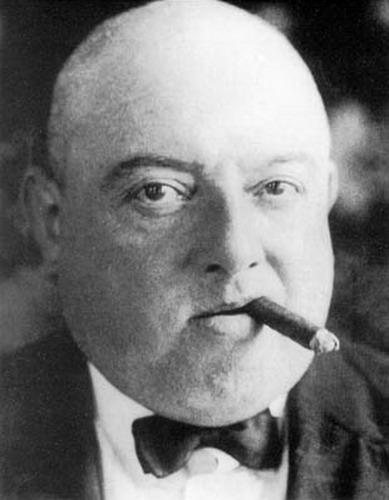 Hugó Scheiber was born in Budapest in 1873. At the age of eight, he moved with his family from Budapest to Vienna. There, he worked with his father, a sign painter for the Pratertheatre, Vienna's largest entertainment fair. In 1898, to help support his family after they had returned to Budapest , he started working during the day, attending painting classes at the Commercial Art School in the evening. In 1900, he completed his studies.

Scheiber showed an early interest in German Expressionism and Futurism. In 1915 he met Marinetti, who invited him to join the Futurist movement. Because Scheiber's paintings conflicted with academic style of the Hungarian art establishment, his work was virtually ignored in his own country. In 1919, he and his friend Béla Kadar held an exhibition organized by Hévesy in Vienna, which was a great success-so much so that the Budapest Art Museum purchased two of his drawings.

In 1920, Scheiber returned to Vienna. A turning point in his career came in 1921 when Herwarth Walden, founder of Germany's leading avant-garde periodical, Der Sturm, and of the Der Sturm Gallery in Berlin, became interested in Scheiber's work. Scheiber's paintings soon appeared regularly in Walden's magazine. Exhibitions of his work followed in London, Rome, La Paz, and New York. Another turning point came in 1926, with the New York exhibition of the Société Anonyme, organized by Katherine Dreier. Important avant-garde artists from more than twenty-three countries were represented.

Scheiber was invited by Marinette to participate in the great meeting of the Futurists held in Rome in 1933, where he was received with great enthusiasm. The vivid colors of "Portrait of a Lady" are a constant feature throughout Scheiber's work. Details such as the rippling waves of hair and Scheiber's spontaneous and active brush strokes are characteristic of Scheiber's Futurist oeuvre of the 1920's. Café and cabaret life played an important part in the lives of the European avant-garde.

Scheiber's focus on café life is exemplified in a number of works illustrated in Schelgl's "Hugo Scheiber, Leben und Werk." His humorous and lively drawings and paintings of dancers, acrobats, singers, and musicians are among his classic works and always elicit a positive response. Scheiber's work has been shown in many important exhibitions since 1945, including: “The Nell Walden Collection” at the Kunsthaus, Zurich (1945), Kunsthaus Aarau (1957), and Kunstmuseum, Bern (1967); “Collection of the Société Anonyme,” Yale University Art Gallery, New Haven (1950); “Paris-Berlin 1900-1930,” Centre Georges Pompidou, Paris (1978); “L'art en Hongrie, 1905-1930,” Musée d'Art et l'Industrie, St. Etienne (1980), and Musée d'Art Moderne de la Ville, Paris (1981). Scheiber's work was represented in the exhibition, “Futurismo &Futurismi,” organized by Pontus Hulten at the Palazzo Grassi in Venice in 1986.