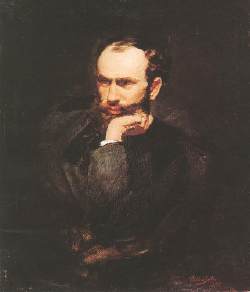 During his studies in Vienna and Munich, he learnt to paint landscapes in the academic style. After he had returned to Hungary, his style changed. He visited various parts of the Hungary. His landscapes of Lake Balaton and the Tisza in greyish shades have a misty look. He depicted peasants and fishermen in an intimate and idyllic manner. His style became less formal in the 1880s. He attempted to depict atmosphere in his pictures which linked him to Corot and French painting. From 1827 onwards, he lived in Munich, then worked in Paris in 1882 and from 1885 onwards he lived in Budapest and Székesfehérvár. Major works: "Lake Balaton", 1874, "Fishermen's Cottages", 1874, "Plane Land with Hay Stacks", 1872, "Ranch", 1879, "Hunters", 1882, "Flock of Sheep", around 1885, "Wild Duck Shot Down", "An Autumn Day By Balaton", "On the Shore of Lake Balaton", "Cock", "Chioggia", and "Szigetvár".