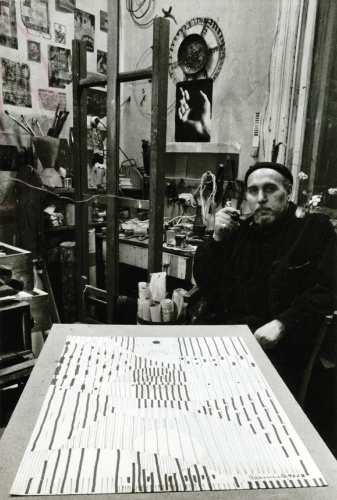 Tihamér Gyarmathy was a student at the Hungarian Academy of Fine Arts from 1933. Between 1937 and 1939 he went on study trips to Italy, France and Germany. The experience and the impressions of his journeys had a decisive impact on his artistic conviction and the evolution of his painting. He got acquainted with Mondrian, István Beöthy, J. Arp, A. Breton and Max Bill. He organised his first one-man exhibition in Paris and the second one in Zurich in 1938. The universal art that he was confronted with was not simply an exemplar for him to follow but represented a source of inspiration. Having returned home he made contact with Lajos Kassák and Ernő Kállai, two dedicated individuals of the Hungarian avantgarde. He painted non-figurative pictures from the early 40s, and in them he endeavoured to utilise both what he had seen and experienced as well as his own theoretical conclusions. In 1945 he became a member of the European School and in 1946 he was a founding father of the Hungarian Group of Abstract Artists and of the Gallery for the Four Cardinal Points.

In 1947 he displayed his pictures at the exhibition of the Salon des Réalites Nouvelles in Paris; in 1948 he had a one-artist exhibition in Budapest. In that year the group was dismissed, and its members could no longer exhibit their works. At that time Gyarmathy chose to live in an internal exile. He provided for his family's needs by means of physical and, later, technical work. When he was made to retire on account of his severe illness, albeit amid serious financial hardships, he could again devote his time to painting. His works were displayed at exhibitions both at home and abroad from the 60s. From 1971 on he went to Western Europe on several occasions and in 1973 he had the chance to go for a tour of the African continent, too. He received numerous foreign awards. He was co-opted into the Hungarian Art Academy in 1991 and into the Széchenyi Art Academy in 1993.