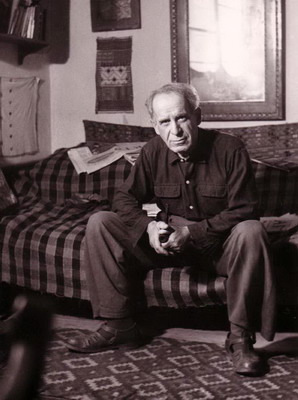 He was a student of Béla Iványi Grünwald in the Nagybánya free school. In 1902-03, he studied at Herterich and Diez, two masters at the Munich Academy. He enrolled in the Julian Academy, Paris in 1903 as a pupil of Jean Paul Laurens. In his pictures, the principles of the Nagybánya school dominated (closeness to nature). He met painters of the Fauves group in 1905 and took over their composition and strong colours. In 1906, he returned to Nagybánya, where he launched a new movement called "Neos". This was his last visit to Nagybánya, from this time on he spent winters in Paris and summers in Hungary. In 1907-08, he spent two summers in Károly Kernstok's colony in Nyergesújfalu where he met artists who had developed the neos' style. He did not take part in Hungarian movements, neither was he involved in intellectual and social problems of his age. In 1914-19, he worked in the painter school founded by the cubist Le Fauconnier in Bergen, the Netherlands. Pictures with strong composition and decorative contours come from this period. During his stay in Berlin in 1919-25, his pictures became even more expressive. Except for the post-war years, he lived in Paris again and spent most summers in Szentendre from 1939.