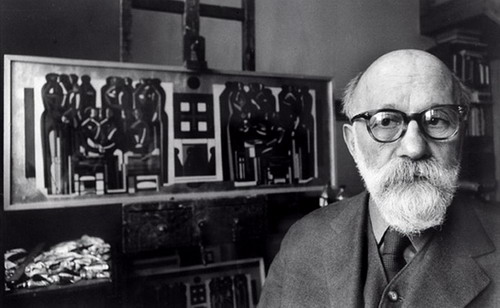 Barcsay, a descendant of an aristocratic family in Transylvania, went to Budapest in 1919 and began his studies at the Art School where he graduated in 1924. His masters were János Vaszary and Gyula Rudnay. He spent the summer of 1926 in Makó and Hódmezővásárhely, which made him discover the constructive structural powers in landscapes. He spent a year in Paris on fellowship from the autumn of 1926, where he was particularly influenced by Cézanne, whose paintings put him under a spell until the rest of his life. He visited Italy in 1927, where he met the ideals of the quattrocento and where he was particularly influenced by the way figures were portrayed. In spring 1929 he visited Szentendre, where he kept returning, and of which he became a resident. 1929-30 saw him again in Paris again on a fellowship to acquire the rules of cubism.

From 1931 to 1945 he was a teacher of the Municipal Apprentice School and from 1945 to his retirement that of the Art School, where he taught figure sketching to all Hungarian modern artists influenced by him until the rest of their lives. His early works are characterized by a sense of dramatic power and strong light - shadow effects. The year 1926 is marked by impressionistic works. Structure became a basic factor of visualization after his stay in Paris. His study trip to Italy produced pictures of people without psychic gestures in static balanced poses. His style, a Hungarian version of constructivism, appeared mostly in his pictures of Szentendre and its neighbourhood. His approach is characterized by emphasizing structure, studying the problems of space and form, as well as by order based on constructivism.

In his works, compositions abstracted on a geometrical principle, constructivist landscapes and figures appear hand in hand with each other. Besides paintings, his mural works and drawings mark his career all through his life. He is the most significant representative of Hungarian constructivist - geometrical art, who had a very strong influence on his contemporaries and the generations to follow. Some of his characteristic works: "Organ Grinder" (1924), "Working Girl" (1928), "Szentendre" (copper engraving, 1931), "Landscape with Hills" (1934), "Self-Portrait" (chalk,1949), "Sitting Woman" (1958), "Church in Szentendre with Cross" (1962), "Picture Architecture" (1963), mosaic design for Szentendre (1968), mosaic for the foyer of the National Theatre (1968), "Blue Mood" (1972), "Composition in Black and White" (1981). His works often appear in tapestry and offset printing.